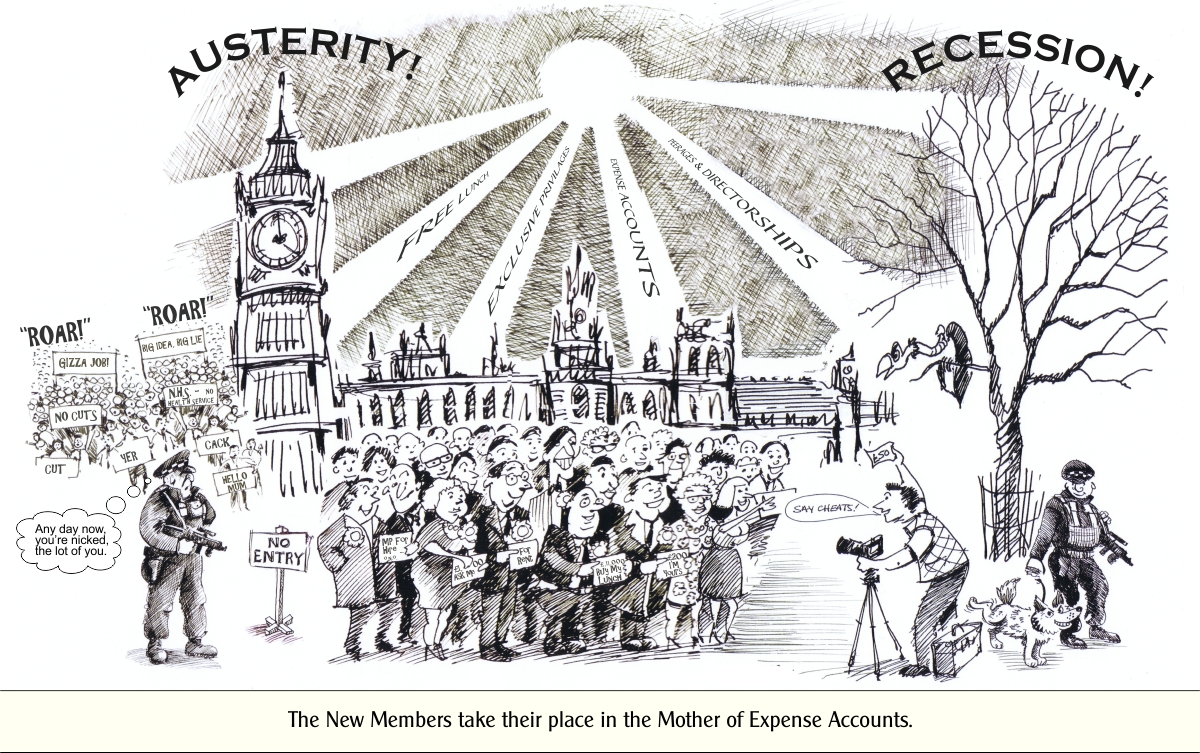 Come and enjoy a unique work of satirical political art conceived by Stockport writer Michael Bond in 2010 and created with the help of several British artists. Welcome to the Little Book of Happiness, a small book about a very big idea.

Once upon a time there was a new and wonderful Prime Minister of Little England called David. When he was first elected in that long-ago time of 2010 he was asked about his Big Ideas for the future of Great Britain and he declared one of his Big Ideas was the creation of a Happiness Index to measure how happy the British people were in the midst of a deep austere recession under his wonderful government.

In announcing his Big Idea, David became the inspiration for a wonderful work of art from Stockport-based writer Michael Bond, which grew and evolved to become what you are now reading about today – The Little Book Of Happiness. This is the 3-step plan to Happiness.

Step 1 – The Prime Minister’s plan was to measure the state of Happiness in the country (no idea why, but since when has that stopped a politician spending tax-payers money on something “visionary”?).  But how do you measure Happiness in a country beset with austerity, a government hell-bent on spending cuts like an Amazonian rain forest timber gang on a slash and burn spree and a recession that has seen millions of young people thrown on the same sacrificial mountain of unemployment and despair as those from the 1930s, 1970s and 1980s?

Step 2 – The Little Book of Happiness is a blackly-comic series of satirical illustrations created with the help of British artists (British jobs for British workers, remember that one?) to help you measure your position in the scale of happiness in Britain.

An index of ten Key Stages from Agony to Ecstasy in a convenient A3 poster-sized format for you to hang on your wall and enjoy the delights of Britain in the throes of political radicalism, again.  But there is another, vitally important reason for this Book of Happiness – to provide a real solution for you and your community, to get us all out of the gutter of recession and austerity and revive this country’s fortunes with a new age of prosperity.

Step 3 – This is the Action For Prosperity, an independent strategy written by the very same Michael Bond who created this book, to revive the economy.  This strategy draws on many years’ study by Michael into the state of Britain’s economy and the real potential the people have to create a new Prosperity and a healthier world, if given the chance. The Book Of Happiness was created to raise some of the local the funds for a range of creative projects in science, technology and the arts, community regeneration and reconstruction, and much more.

The Book of Happiness was originally created in 2010-11 but has continued relevance to the world (2020-21: in the midst of a world-wide zombie apocalypse, panic-demic, epidemic, panic attacks and the catastrophic challenges the country and communities face today and into the future). The original Book of Happiness was published as a Limited First Edition of 1,000 copies and some are still available to raise new funds for economic regeneration initiatives.

Individually, uniquely numbered to identify them for all times.

A rare limited first edition that will increase in value in the future.

A Valuable Limited First Edition For You

You already know this story: a new book is released in a short edition run, then a couple of decades later it or the writer becomes world-famous and suddenly that book is worth hundreds or thousands of pounds. Well this is your special chance to invest in this uniquely Limited Edition.

Buy the Book of Happiness today, help support Michael’s work and as his work blossoms the value of the Book increases. Keep it clean and safe, sell it later and recoup your little investment and increase your personal prosperity.

Each copy is signed and numbered so there is full authentication for the entire life of the Book from the moment it leaves Michael’s hands and enters your life.

Come and Enjoy a Little Sample

Have A Look, Buy the Book

Oops! Not available for sale right now, Michael is busy trying to save the economy. Be back soon(ish).